A message came through from a colleague down at the Douglas Shire Historical Society, Mr Noel Weare who was concerned about the recent damage that had been done to the old Port Douglas to Thornborough road.  He was worried that the old stone pitching on the Granite Gap (also known as the Dora Pass) section at the end of the Hann Tableland had not been correctly recorded.  As he had never documented that piece of the old road and he thought he was beginning to get a little long-in-the-tooth for climbing into the mountains, he thought we might like to organize an expedition to check the condition of the road and record the old stone pitching.  Duncan didn't need to be asked twice, especial as he wanted a challenge to put his new four wheel drive vehicle through.  So after a quick ring about, a car load of history buffs was heading down to Mount Molloy to meet up with Noel and friends coming up from the coast.  Soon the team of seven historians were on the road out to Fonthill Station.

It was sad to see the condition of old Fonthill homestead.  It appears to have been many years since any permanent resident had occupied the homestead and the older building was looking very derelict. Fortunately, the old road had been gazetted and was still recognized as a public thoroughfare and is also a part of the National Horse Trial so we were able to drive through the station and across towards Dora Creek where the old road turned up into the hills at the end of the Hann Tableland.  For those of us who had never travelled into this area before, a real shock was install as we crossed into Southedge Station.  We broke out of the forest country of Forthill into the huge valley plains that the developer George Quaid had cleared with a team of large bulldozers back in the 1980's when he built his dam.  The Google Earth imagines just don't capture the full scale of this enterprise.  One can not use hectares to describe the clearance, you have to use square kilometres, so vast is the area.  I suspect that very few people realize the extent of these cleared valleys, hidden behind the hills on the other side of Lake Mitchell.

We made a stop at a small isolated hillock beside the track and climbed it to get a view of the landscape.  The bulldozers had destroyed all trace of the gazetted road and no effort had been made to restore the pathway, so we hoped the landowners would not be upset as we followed the track towards Dora Creek.  Somewhere nearby was the supposed site of the Round Hill aboriginal 'dispersal' but little was recorded of the event.  We continued our journey and turn into the Dora Creek valley and up pass a half-dozen freehold farming blocks near the site of McDonald's old farmstead and wayside shanty hotel.  The track quickly deteriorated as we climbed up towards the Gap.  The lighter vehicle soon became stuck on a particularly steep pinch which showed the folly of trying to put a dray road through the Granite Gap.  Little wonder this road was only used as a pack-track for the horse teams while the heavy drays went the long way around the Hann Tableland to get to the Hodgkinson goldfield.

Only about a hundred metres from the stuck vehicle, we came across the first piece of stone pitching and a little further on was the most impressive segment of the stone work.  A true example of this fine
old craft which has weathered the past one hundred and thirty-five years remarkable well.  After photographing the stone work, we wandered on up the road towards the Gap which turned out to be further than it looked.  Duncan and Jack continued on to the top while the rest of the party had a break and discussed the history of the road and the possibility of having this section heritage listed.  Then it was back down to have some fun getting the stuck vehicle off the steep pinch.  On the way back out, we startled one of the occupiers of the farming blocks who was concerned as he had begun to burn off without realizing we were behind him.  After a late lunch at the site of McDonald's old establishment, we then drove back out of the area, crossing the cleared valley to hit the main road beside the little bridge over Oakey Creek where we parted company with Noel and headed for home.  The end of an interesting day's adventure out exploring our local heritage.

Posted by North Queensland History an adventure at 03:34 1 comment:

Email ThisBlogThis!Share to TwitterShare to FacebookShare to Pinterest
Labels: Adventures 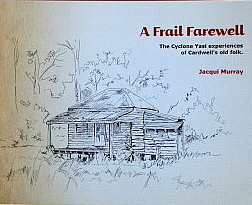 'A Frail Farewell', which tells the story of the cyclone Yasi experiences of Cardwell's old folk, is the title of the publication now available after its recent launch in Cardwell by award-winning Townsville Bulletin editor, Mr John Andersen.  Written by historian and broadcaster Dr Jacqui Murray, the book is a touching and poignant document on how these people, many of them dependant on high levels of care, were failed by the government authority.  Bundled into buses to escape Yasi at the last hour, they were driven down to Townsville where they were laid on mattresses on the floor of a school hall.  Despite the horrors they faced, their stories are beautifully told by the old folk and exquisitely written up by Dr Murray.  A Frail Farewell is an important historical document and a 'must read' for anyone with an interest in cyclone Yasi, Cardwell or aged care and is available from the Cardwell Historical Society.
Posted by North Queensland History an adventure at 04:47 No comments:

The folk down in Gordonvale at the Mulgrave Shire Historical Society have recently published a new book on their wartime history.  The book entitled 'Gordonvale and the 503th Parachute infantry Regiment' was launched at their end-of-year break up meeting at the old Mulgrave Rambler Station to a near capacity audience by local Councillor Steve Brain.  This publication details the progress of the only U.S. Parachute Infantry Regiment to train in Australia from the establishment of a camp outside town and their training through to their interaction with the Gordonvale community.  This volume is an interesting addition to the study of the North's wartime history.  You can purchase a copy from the Gordonvale museum.
Posted by North Queensland History an adventure at 02:43 No comments:

A good crowd of about eighty history buffs recently attended the opening of a new museum at Chillagoe.  The Chillagoe Courthouse Heritage Centre was opened by Mareeba Magistrate Tom Braes and Mayor Rosa Lee Long along with other dignitary in an event which gives new life to this long closed facility.  Dr Ruth Kerr gave several history talks on the Chillagoe mining industry and on the Mungana Scandal of the 1920's.  Mrs Mary Bolam and the members of the Chillagoe Alliance group worked hard to bring this project to completion after watching this old building sitting empty and unused for decades.  This new display gives a view of Chillagoe's history through the eyes of the local justice system.  The courtroom has been refurbished with artefacts and historic photo panels telling stories from police files.  Another great addition to this town's heritage infrastructure for history enthusiast to visit.
Posted by North Queensland History an adventure at 05:04 No comments:

The new format for this year's stall at the Malanda Show turned out to be a great success.  Having a table displaying artefacts along with the usual photo display attracted a lot of attention and having the books on one of the new freestanding display stands help to greatly increase the merchandise sales.  The museum reported an enormous increase in the numbers of visitors coming through the door as the tourist season got into full swing and Ed reported on the amazing success of the Society's new Facebook site which has seen more than twelve thousand visitations in its first six months.  The recent meeting of the Society saw a discussion on the future of the 'Tin Field Memoirs' manuscript that the late Glenville Pike gave to us and it was decided to assist Mal Brown with the publication of his book on the history of the local schools.
Posted by North Queensland History an adventure at 04:45 No comments: