A discussion held long ago with Mrs Betty Stone put a notion into the back of our minds to one day seek out the site of her great grand-parent's old wayside hotel.  A few years back, Betty instigated a project to place a plaque beside the road between Mareeba and Mount Molloy to commemorate the life and works of Gabriel and Doretta Sorensen who kept a road side shanty hotel and staging house for those travelling between Port Douglas and the mineral fields.  The couple had met on the Hodgkinson goldfield and were married at Kingsborough in 1878.  A few years later, with two small children in tow, they opened their shanty style Public house, known as the Ten-mile, at the base of a small hillock  near the Big Mitchell River and not far from Carr Creek.  They ran the wayside hotel for about twelve years and closed it after the railway was completed to Mareeba in 1893 taking much of the traffic off the road.  Four more children were born to the couple while they were at the hotel and one of their children was Betty's grand-mother. 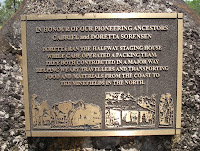 The annual bushfires had pass through the area and the district had seen some early storms that had greened the place to a park-like state.  So, with a lazy Sunday without any prior plans, the intrepid trio of Duncan, Robert and myself, decided to head down to Mount Molloy to seek out the site of the old pub.  After a phone call to our old friend Betty for final directions, it was off on another little adventure with the first stop being the plaque attached to a rock beside the road.  We then drove slowly along the road looking closely at the small hills before choosing to start our search at a hill that was so small we almost dismissed it.  Our choice turned out to be very fortuitous as we were to walk straight to the site.

As soon as we stepped out of the vehicle, we liked the look of our selection and the spirits of the ancestors, cunningly disguised as March flies, swarmed to greet us.  Thank goodness for the Aerogard!  Within a hundred metres we came upon the first sign of a structure, being a slab of old concrete but certainly not old enough to be the site we were looking for.  A little further on around the hill, we came upon several rows of small concrete slabs and it soon became apparent that a Main Roads camp and depot had been built here nearly fifty years ago when the new bitumen road was constructed down to Mount Molloy.  A sense of disappointment came over us as we realized that the old hotel site may have been bulldozed if this was the correct area.  This feeling quickly became a certainty when we came across the remains of a very old rubbish heap.  The large number of pieces of old green beer bottle and crockery made it obvious that some structure had occupied this site back in colonial times.  The Main Road dozer had cut right through the rubbish heap and where the little hotel would have been positioned, now sat a row of old concrete slabs of small accommodation blocks.  All remains of the hotel would have been pushed away long ago.

We searched through the rubbish and then the general area but could find no other evidence of the hotel other then the small lagoon that had supplied its water and the nearby course of the old road that would have once brought the travellers past the front of Sorensen's old wayside Public house.  Looking over the area from the site of the shanty pub across to the old road and down to the small lagoon, it was obvious that we would have no hope of finding any remains of the grave of Sorensen's eldest child, Mary Drucilla Sorensen who died there of diphtheria at eight years of age in February 1888 and was buried in an unmarked grave not far from the house.  Although unhappy in that we could find little of the wayside hotel, it was a great day out exploring our heritage and to celebrate, we call into the Emerald Creek Ice Creamery where we blew our diets with a calorie-laden ice cream and an iced coffee to die for.

Posted by North Queensland History an adventure at 04:22 No comments:

Email ThisBlogThis!Share to TwitterShare to FacebookShare to Pinterest
Labels: Adventures

The general feeling at the recent AGM of the Heritage North association was that the changes made to the groups' format in the pervious year had not had the desired outcome.  Many who once attended the regular meetings missed the social interaction with members of other historical societies and the lack of regular meetings had the unforeseen consequences of the closure of the groups' newsletter due to not having regular quarterly reports from the member Societies.  This tended to defeat the very purpose for which the group was formed.  It was decided to return to the old structure of the organization along with more emphasis on training sessions at the meetings.  The one workshop the group held earlier in the year was a great success and this showed its real value, if we can find the personnel to manage the group.  The next meeting will be held in Malanda on February 22 with the Eacham Historical Society as the host.
Posted by North Queensland History an adventure at 03:28 No comments:

In early 1985, Mr Martin Grandelis, who had just arrived on the Tablelands to take up the position of Principal at the Upper Barron School, was asked to take the minutes of a meeting of the Eacham Junior Rugby League.  This was the start of a long involvement with the Junior Rugby League and his interest in its history was sparked shortly afterwards when he and several students were cleaning out the storeroom at the school and came upon an old rugby league shield.  Over twenty years later in 2008, Martin began his study with the result some five years later being a book on the local junior football league entitled, 'A History of the Eacham JRL 1969-1999, the first thirty years'.  At the recent launch in Atherton, at an impressive event in the Merriland Pavilion, Martin told the crowd of a couple of hundred football fans how more than 500 people had shared their experiences and old photographs which along with detailed records of the League, enabled him to put the story together.  Mayor Tom Gilmore of Mareeba had the honour of launching this large 600 page volume with its 825 photos.  The book details the champion teams and Grand Finals triumphs along with the controveries and upheavals of that first thirty years and it also records the growth of the professionalism in this junior sport.  Although I won't be in a hurry to obtain a copy as I was a soccer playing boy in my younger days, I found that many of my cousins and school mates appear in the book.  A truly impressive work of local history that could find a place in the home of any local footy fan.
Posted by North Queensland History an adventure at 03:35 No comments: