The Eacham Historical Society has been busy over recent months in three main fields; book reprinting, field trips and celebrations at the museum.  After the successful field trip to the Millaa and Middlebrook area earlier in the year, the group conducted a very successful trip out to Irvinebank when the Irvinebank Progress Association celebrated this years' Heritage Festival by opening many of their heritage listed building that were not generally open to the public.  More than two dozen members turned out for the trip which included a guided tour and a light lunch.  The Prokhorov celebrations at Butchers Creek School give the Society an opportunity to have a field trip about the farming lands in that area where many of the old Russian families settled as well as meeting the grand-son of the Nobel Prize winning scientist.  The most recent field trip was a tour of the museum along the coast from the Mourilyan sugar museum up to the Innisfail museum, then on to the small collection at Babinda with the trip ending at Gordonvale at the Mulgrave Settlers Museum.  It was good to catch up the other heritage groups and see their collections.  The Society members who volunteer at the group's museum at Millaa Millaa held a small get-together to celebrate forty years since the Society opened their museum.  A couple of the founding members spoke of the group's early efforts in setting up the museum and a cake was cut in celebration of the event.  The other big project for the Society over recent months has been an effort to reprint a number of the group's publications.  The last stock-take showed that stock of several of the Society's book were almost finish and it was decided to make a major effort to reprint these books and include several older titles that had been out of print for many years. It was also decided to rewrite a couple of the Society's older books and bring them back into print.  With the end of the year approaching, this years end-of-year parties are now been planed.
Posted by North Queensland History an adventure at 19:38 No comments:

Glenys Lonie and the museum staff have been busy working on the next exhibition for the Temporary Gallery which was installed in the last week of September and opened in the first week of October.  The new exhibition features shells with photographs, sheller's stories, shells in use and shelling equipment.  Glenys has found this project very interesting and was introduced to much scientific information as well as the legalities of shell collecting.  The Society had a truly successful day at the stall for Carnival on Collins.  Thanks to the volunteers for your efforts on that day.  They received really positive reports about the Historical Society and people's level of enthusiasm for the museum was high.  The Society was please to announce that Mr Noel Weare from the Douglas Shire Historical Society was this year's winner of the SE Stephens History Award.  Noel has spent many years researching various aspect of Port Douglas' history.  The new museum has now been open for several months and we have all been on a steep learning curve.  Since opening the Society has welcomed over 4500 people into the museum including locals, school groups and students and international visitors.  The Society lost one of its most dedicated members when Mr Gil Jennex passed away recently.  Gil was the group's librarian for almost thirty years and was the face of the Society.  With the phone on his desk, he took most incoming calls and people visiting the Society were invariably directed to him with their queries.  Under his direction the Society's collection has become recognized as the best and most accessible research library operated by a volunteer organisation in North Queensland.  Gil did not confine his library skills to this group but also helped other societies including Eacham and Mulgrave with their early cataloging.  He has left a lasting legacy at the Society and was a very worthy recipient of a Life Membership.  The last set of local history lectures were held on 28 October with all the papers having a military theme.  Michael Musumeci delivered a power point presentation on North Queensland air crashes during WW2, Pauline O'Keeffe spoke on two WW1 soldiers and Trev Clark looked at the effectiveness of propaganda, censorship and media bias on WW1 referendum.
Posted by North Queensland History an adventure at 18:47 No comments: 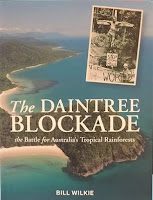 In late 1983, a small group of local residents organised a protest to stop work on a road being built from Cape Tribulation to Bloomfield.  The local Council, in defiance of the parks authorities and the state government agency in charge of roads, decided to bulldoze a track through.  Council's preparatory surveying and engineering work was slipshod and amateurish.  Even Russ Hinze, then the Minister for Main Roads and a man not known for his conservationist credentials, was appalled.  The protest brought a stop to construction, the media arrived, the police were called in and protesters were arrested.  When supporters of the protest arrived from southern states, the confrontation escalated into a full-blown environmental protest; The Daintree Blockade.  The blockade set off a clash of ideologies; Greenies against developers, hippies against the local Council and anarchists against police.  The blockade failed - the road went through and the short term impact on the environment was as dire as expected.  Run-off from the road affected the Great Barrier Reef and the integrity of a unique wilderness site was damaged.  In Council's haste to push it through, that first road was so poorly constructed that the first celebratory motorcade to travel on it became hopelessly bogged and had to be painstakingly towed to safety, one by one.  In time, the Daintree blockade would take its place as one of the big three early rainforest campaigns that helped shape the growing Australian environment movement.  Bill Wilkie takes readers into the heart of the Daintree, the oldest rainforest on the planet, revealing the courage, passion and dedication of those who fought to protect it.  This new book features 344 pages, more than 250 photographs and a foreword by actor Jack Thompson.  The Daintree Blockade is based on over 80 interviews with key protagonists and intensive archival research.  In the end, the world's attention had been drawn to the unique Daintree ecosystem and the result was World Heritage listing, a tourism boom and growing economic prosperity for the region.  Wilkie's important book reminds us all that these outcomes were never inevitable and should never be taken for granted.  I spent a little time on the earlier Windsor Tableland Picket in 1981 on the western side of the Daintree which gives me a personal interest in this story.  It was a surprise to me to learn that this is the first book to be written about the protest and it has now won the 2017 Queensland Premier's literary award for a Work of State Significance.

Posted by North Queensland History an adventure at 04:04 No comments:

Many long years ago, back in those days before my bones begain to creak, a rather vigorous discussion was held about the campfire concerning the true identity of the mysterious 'Mr Stewart' who accompanied William Hann on his famous 1872 northern expedition.  Our old friend Mr Alf Stewart believed it was his grand-father, John Ignatius Stewart who held that honour but his claim just didn't seem to ring true to us.  Alf had little evidence but old family tradition to back-up his story.  His research efforts at that time failed to offer facts to prove his story and he admitted that counter claims existed.  Now twenty-five years after old Alf had passed away from this world, I have discovered the truth behind the mysterious 'Mr Stewart'.

I have that blessed gift to historians, the 'Trove' website to thank for the path to solve this little mystery.  All the old reports on the Hann Expedition of 1872 refer to the last two men of the party only as 'Stewart and Nation', with no further information.  While researching another subject, I noticed that an old newspaper article from that period refered to a member of the Hann party as 'Mr Stewart better known as Peak Downs Stewart'.  This was the clue I had been waiting for.  I reached for my book by Dan O'Donnell on the history of the Clermont district but not a word about an early day Stewart.  Back to Trove!  There in the old newspapers was mention of an ex-squatter named Mr W.R. Stewart who had brought some of the first stock into the district when he briefly owned Peak Downs Station in the very earliest days.

I was on the right track as I soon found an article referring to an early grazier from Peak Downs named William Robert Stewart who was better known as 'Peak Downs Stewart'.  It looks like I found him and what a shame that our old friend Alf, who passed away in 1993, never got to know the truth behind this little mystery.  And the identity of the 'Mr Nation' of the expedition.  It turns out he was William Nation, a man who had come up from South Australia in the early days to help set up a station and then had joined the goldrush to Gilberton in 1869 where he became a partner in a storekeeping firm of Tulloh, Nation & Co.  After this business partnership broke up, he became the town's Postmaster before joining Mr Hann on his expedition to explore the country to the north.
Posted by North Queensland History an adventure at 16:23 No comments:

Email ThisBlogThis!Share to TwitterShare to FacebookShare to Pinterest
Labels: In light of the Campfire
Newer Posts Older Posts Home
Subscribe to: Posts (Atom)