Yet Another Yasi Book 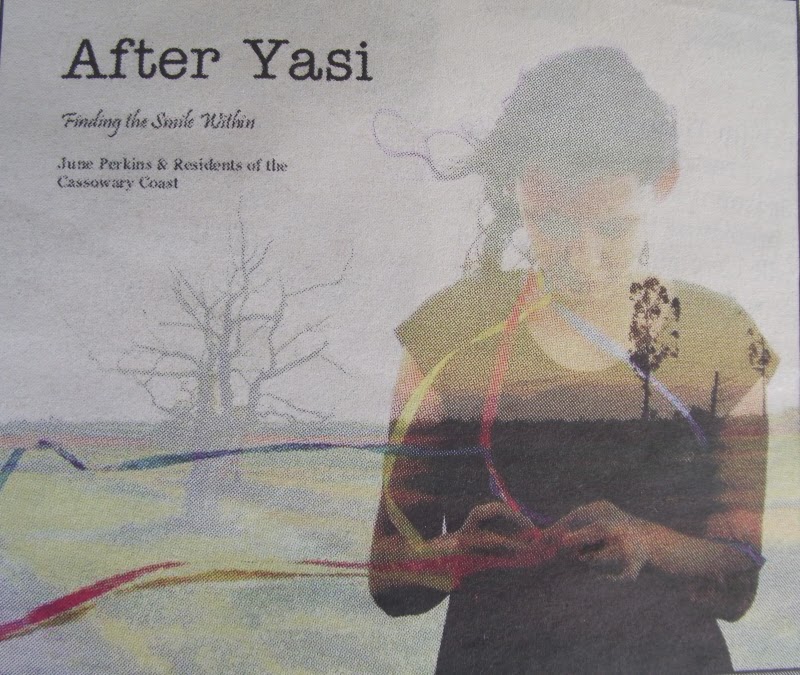 I had a quick flip though the pages of the recently published 'After Yasi' by June Perkins.  This must be the third or fourth book written about this severe tropical cyclone and in this case, it was compiled with the assistance of the residents of the Cassowary Coast area who had experienced the event.  Although there are some pictures of the damage done by the storm and a few descriptions of what happened, the main emphasis is not on the traumatic incident but on the recovery of the community afterwards.  This volume is not so much for the local historian as it is a social reflection of how the cyclone affected the lives of the residents and changed their attitude to life.  The poetry and artistic expression in this book will appeal to many readers and to those who are interested in how people coped with this kind of disaster.  Not really my 'cup of tea', but others might like it.
Posted by North Queensland History an adventure at 04:47 No comments:

At a recent heritage meeting, I caught up with several members of the Innisfail history group who brought me up to date with happenings at their Society.  They are busy with planning for a number of projects, one of which is the approaching annual 'Taste of the Senses' festival which they support with a display at their museum and a stall out the front of the building.  Another project the group are occupied with is the publication of a booklet of old photographic images of the distrct which will raise needed funds.  This year is the 100th annual Innisfail Show and some thought is already been given to a special history display for the event.  They received some good news recently when the Society learnt that they had been successful in obtaining a grant of $900 to appropriately copy three editions of a historic local newspaper that was donated to the group.  They also brought us up to date on the work been done with the new book on the history of the Mission Beach district.
Posted by North Queensland History an adventure at 04:21 No comments:

The mining history enthusiast gathered recently at the Herberton Mining Centre for their first quarterly meeting for the year which started with the long awaited news that the problem of searching for some affordable insurance for the group had been resolved.  A few updates were given on research been done by members and a project for next years' centenary of Anzac was discussed with some ideas on recording the local miners who joined the Tunneller Companies.  This was followed by a brief discussion on the risk to mining heritage from the Government program to fill in old mine shafts and the lost of old mineral collections and geological libraries.  The speaker at this meeting was Col Robinson who gave an excellent lecture on his research into the history of the northern tin dredging industry.  Hope to see this turned into a book some day.
Posted by North Queensland History an adventure at 04:03 No comments:

Ten local history buffs representing four member groups attended the recent quarterly meeting of the Heritage North Association which was hosted by the Eacham Historical Society in Malanda.  After the reports from the different Societies, a brief discussion was held on the personal accident insurance policy for museum volunteers and it was resolved to look into the policy to ensure that it is suitable for today's requirements.  That was followed by a talk on the need to produce a new tourist brochure to promote the north's museums as the previous one is now some twenty years old and the few that is left are quite out of date.  Also discussed at the meeting were ideas for training workshops for the current year and the need to restart the Association's newsletter to keep the more isolated members, who find it difficult to attend, informed of goings-on.  The Innisfail Society will host the next meeting in late May.
Posted by North Queensland History an adventure at 03:46 No comments:

Gwen and the history buffs who conduct the little family and local history group at the Atherton Library has been busy and have drawn up a draft schedule for this year.  The theme of the last meeting was Names and as the next meeting will be held before Anzac Day, the theme for the April meeting will be Soldiers, Sailors and Airmen.  The upheaval caused by the de-merger of the Shire Councils has been sorted out with the group moving their history centre into the room previously used by the Children's Activities group.  The group gather at the Meeting Room in the Atherton Library on the first Thursday of the month at 10am.  For a copy of the schedule or more information on this group, contact Gwen at the library.
Posted by North Queensland History an adventure at 03:28 No comments:

Echo of a Chinese Temple

A couple of years ago, I came across a short newspaper article from a 1932 paper which described the last days of the old Chinese Temple at Herberton.  The piece told how the Chinese population of the area had diminished until at last, the Celestials had practically all departed but for an old feeble few who were left to meet the rates on the temple.  As the rates were accumulating and the be-tinselled roof of this 'Joss house' was all but collapsing under this added burden, action was taken under the Local Authorities Act and the worshipping place of the Sons of Heaven was sold by tender.  (What the hell was the Herberton Shire Council doing charging rates on a place of worship?)  The buildings were bought by Messrs Day and Ross for 20 pounds and were carted off to make a tobacco curing shed and the temple furniture, which included the two profusely ornamented Josses was also sold and realized a pitiful sum when their lustrous history was considered.  For nearly fifty years those ornaments had presided over a host of worshippers and were purchased by a Presbyterian clergyman, Rev. Porter Young and were sent off to spend their sad unofficial existence in a British museum.

I had not even known that there had been a proper Chinese temple in Herberton and a discussion with local Herberton historian, Mr Ivan Searton revealed a desperate lack of information on this subject.  He could not even find a photo of the temple and as it was demolished back in 1932, knowledge of the temple had faded from living memory long ago.  Ivan discovered that the temple had stood on a allotment which is now owned by Artie and Pat Day and my mate Duncan had learnt that the buildings had been taken out to Watsonville to an old tobacco farm which was now owned by an old friend, Craig Terrens.  On the off chance that something might remain of the buildings, Duncan made a quick visit and found the foundations of the tobacco shed still in existence and to his amazement, embedded into the concrete, were Chinese characters.  They had used the panels from the front of the temple as formwork for the concrete walls.  In an effort to record this writing, the intrepid trio of Duncan, Robert and myself, along with our friend Xiao Hu (Frank), were soon off on a little archaeological expedition, although no doubt, our techniques would have sent shutters of dismay through the members of Time Team.

After driving out to Craig's place, we made a quick review of the site and concluded that those who built the tobacco shed had used the panel from above the temple door and another from beside the door in the formwork.  Both had been used several times, once during the construction of the front half of the foundations and again on the back half.  We hoped this duplication would help with the interpretation of the calligraphy, as after nearly eighty years, the writing was badly worn and it was difficult to determine the precise shape of the individual characters.  After painstakingly outlining each character the best we could with white chalk to assist with the examination, we were able to gain some half decent photographic images which we will be able to reverse in order to get an analysis of the writing.  Our companion on this outing was young 'Frank' (as he likes to be called) who had a working knowledge of the Chinese language, as both of his parents were from southern China.  He concluded that the script was in the old traditional language which he had little understanding, although he could translate several of the characters.

A small structure had been built beside the tobacco barn and the floor stumps were still in place.  Robert gave the whole site a good going over with his metal-detector in the hope that something of the old temple might have been brought out and had survived, but too no avail.  Meanwhile, Duncan attempted to gain plaster casts of some of the writing but this was not very successful and Frank and I took measurements of the foundations and then cut away trees and shrubs that endangered the structure.  Photographic images of the characters were later sent to another friend of Chinese descent, Kwan Chan who hails from Hong Kong where a more tradition script is still used.  Preliminary indications are that this was the original Hou Wang Temple of the district with the Atherton Hou Wang Temple been built some twenty years later after the decline of the Herberton Chinese community and the rise of the Atherton Chinatown as the main centre for the local Chinese folk.  This had been a grand exercise and the story of this lost temple was presented at the 2014 CHINAinc conference in Cairns.  The search for information and photos of this now forgotten temple and community continues.

Posted by North Queensland History an adventure at 04:42 No comments: